Morrison Hall, home of the Kinsey Institute, is closed to the public for renovations during Fall semester 2016. 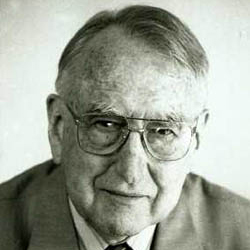 Born in Morrinsville, New Zealand, John William Money emigrated to the United States in 1947 and received his Ph.D from Harvard University in 1952. In 1966, Dr. Money founded the Gender Identity Clinic at Johns Hopkins University and started an extensive research program on the psychohormonal treatment of paraphilias and on sex reassignment. Money formulated, defined, and coined the term "gender role" and later expanded it to gender-identity/role (G-I/R). In 1961, he proposed the hypothesis that androgen is the libido hormone for both sexes.

Extending his research from the clinic to clinical history, Dr. Money wrote about the 18th century origins and present consequences of antisexualism in The Destroying Angel: Sex, Fitness, and Food in the Legacy of Degeneracy Theory, Graham Crackers, Kellogg's Corn Flakes, and American Health History (1985). Venuses Penuses: Sexology, Sexosophy, and Exigency Theory (1986) is an anthology of his theoretically significant writings. His publications also cover the philosophy and methodology of science in the practice of clinical psychoendocrinology and sexology, includingUnspeakable Monsters in All Our Lives: The Complete Interviewer and Clinical Biographer, Exigency Theory and Sexology, and many other monographs.

The John Money Fellowship for Scholars of Sexology

Dr. John Money established The John Money Fellowship for Scholars of Sexology in 2002. The fellowship supports graduate students whose scholarly work would benefit from the use of library and archival materials at the Kinsey Institute. Fellows are also expected to contribute to the organization, preservation, and/or accessibility of Kinsey Institute collections. Examples include, but are not limited to the creation of:

Award amount
Each recipient of the John Money Fellowship for Scholars of Sexology will receive $3,000 in two payments ($1,500 at the start and end of the fellowship). The fellowship must be used to cover travel, lodging, and research expenses associated with the stated purpose. There can be up to two fellows each year.

Applications are encouraged from students from any academic discipline who are enrolled in a graduate program in the United States and whose research interests concern the history, politics, and methodology of sexology and sexuality studies.

Application requirements
Applications must include the following (submit hard-copy materials):

Ruby Daily (Northwestern University) and Demetrios Psihopaidas (University of Southern California) are the 2016 recipients of the John Money Fellowship for Scholars of Sexology. As a fellow, Daily hopes to show how 20th century sexual identities and networks often formed and diffused within a global "Anglo" culture. Demetrios will review the John Money collection to gain a better understanding how the field of knowledge production about gender transgression first gained a sense of scientific credibility.

Love is more than an emotion. It is essential to our individual and collective well-being. Your support will help the Kinsey Institute advance research and education in the science of love and give a diverse field of researchers the resources they need to make new discoveries.