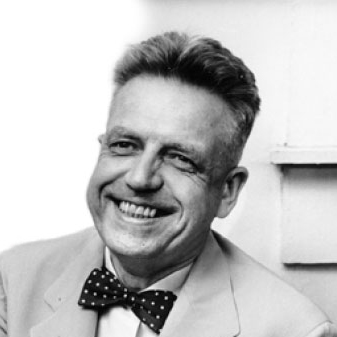 Dr. Kinsey arrived at Indiana University in 1920 as an assistant professor of zoology. For the next 20 years, Kinsey studied gall wasps, and established a solid academic reputation for his biology tests and his research in taxonomy and evolution. By 1937, American Men of Science listed him as one of their "starred" scientists.

During his work on gall wasps, Dr. Kinsey developed many of the techniques around recording and organizing data that would come into play in his later research into human sexuality. He took dozens of minute measurements on each tiny wasp, and recorded the data in sheafs of notes, later developing his own coding system for the information - precursors to the detailed sex history questionnaires and recording codes he developed for use by his sex research team.

In 1938, the Association of Women students petitioned Indiana University to offer a course on marriage for students who were married or contemplating marriage, part of a nationwide demand for similar courses. Dr. Kinsey, popular with students, was invited to coordinate the new course, "Marriage and Family," restricted to senior and married IU students.

Faced with questions from students about sexuality, Kinsey could find little scientific information on human sexual behavior that was not value-laden or based on small samples from clinical trials. His interest in the topic was piqued by this "gap in our knowledge," and he began collecting sex histories, first from his students, and then from groups and individuals in Bloomington and throughout Indiana.

In 1940, President Wells gave Kinsey a choice: to continue either with the marriage course or with his sexuality research project. Kinsey chose to concentrate on his sex research, again crisscrossing the United States, this time to conduct sexual behavior interviews.  Over the next few years, Dr. Kinsey sought out funding for his research expenses and began gathering a research team.

In 1947, Dr. Kinsey became the founding director of the new Institute for Sex Reseach (ISR), which published Sexual Behavior in the Human Male in 1948 and the complementary work, Sexual Behavior in the Human Female ,in 1953. The two books were wildly popular, and Dr. Kinsey became an American celebrity mentioned in cartoons, novels, and popular music.

"We are the recorders and reporters of facts—not the judges of the behaviors we describe."

During his early career as an entomologist and zoologist, Kinsey travelled across North America collecting specimen wasps and the galls from 36 states and parts of Mexico. Altogether he amassed a collection of more than 7.5 million gall wasps that is still available to researchers through the Division of Invertebrate Zoology of the American Museum of Natural History.

In his personal life, he was known for his collections of both irisis and 78 rpm records.  His expansive gardens included over 250 different varieties of irises, some of which he sold to local gardeners and other collectors. A music lover, when the 78 rpm record was introduced, Kinsey began avidly collecting again, building one of the largest private record collections in the Midwest at the time.

When he turned his attention to sexology, Dr. Kinsey was no less ambitious, outlining a goal to collect comprehensive sex histories from 100,000 interviewees. The interview questionnaire he designed for his research team included hundreds of questions on every aspect of human sexual behavior. While the average interview lasted a couple of hours, some could run as long as six hours or more. The resulting collection of over 18,000 detailed sex histories has never been matched.

In Introduction to Biology, Kinsey said about the passion for collecting:

"If your collection is larger, even a shade larger, than any other like it in the world, that greatly increases your happiness. It shows how complete a work you can accomplish, in what good order you can arrange the specimens, with what surpassing wisdom you can exhibit them, and with what authority you can speak on your subject."

Dr. Kinsey passed away unexpectedly at age 62 on August 25, 1956 of a heart ailment and pneumonia. Earlier that year, he gave an interview to NBC News (see rehearsal tape below) and interviewed his last two subjects. All told, Dr. Kinsey personally took 7,985 of the approximately 18,000 sex histories gathered by the Institute for Sex Research team.

In the early nineteenth century, moralists and legal authorities defined the state of sexual knowledge and appropriate practice. In the second half of that century, physicians, psychiatrists and criminologists, joined by other clinicians in the early decades of the twentieth century, dominated theory and research, mainly under the notions of sexual disease and deviancy. Trained as a taxonomist in biology, Alfred Kinsey set out in the 1930s as a disinterested scientist to document the full variety of human sexuality in order to provide a more scientific basis for society's approach to sexuality.

His major legacy as a key figure in the process of change included:

Consult this page for a list of publications of the sex research team prior to the establishment of the institute (1941-1946) and during Dr. Kinsey's time as Director (1947–1956).

Sexuality and intimate relationships are essential to our individual and collective well-being. Your support will help the Kinsey Institute advance research and education in the science of love, sexuality, gender, and sexual health, and give our diverse field of researchers the resources they need to make new discoveries.