Every year, Indiana University offers Themester, a cluster of fall courses and events around a common theme. This year the theme is @Work: The Nature of Labor on a Changing Planet. The Kinsey Institute is participating by hosting a variety of events this fall examining forms and influence of sex-related work.

Annie Sprinkle has made sexually oriented media and art for four decades. She has a doctorate in human sexuality from the Institute for Advanced Study of Human Sexuality and has worked a prostitute, feminist stripper, adult film actress, cable television host, adult magazine editor, writer, photographer, and sex film producer.

Annie's lecture drew a large and engaged audience. She shared with them her life and career, her focus on pleasure and sex positivity, as well as her current work as an ecosexual activist.

Annie & Beth were also interviewed by WFIU's Yaël Ksander about ecosex as a "pleasure-driven approach to environmentalism." You can listen to "The Exosexuals: Tree-Hugging And then Some" here »

Visitors to the show will see more than 80 artworks, photographs, artifacts, film posters, books, magazines, and documents from the Institute's research collection that include various forms of sex-related work.

The show curators have attempted to get beyond the stereotypes of sex-related work as demeaning or victimizing and explore how these professions have featured in our social history, and continue to play a significant role in the American economy and culture. 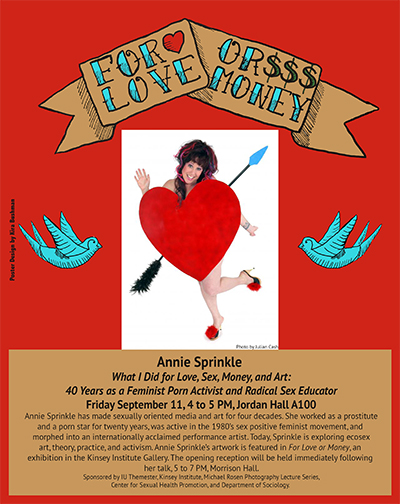 IU Professor of Sociology Martin Weinberg--"Sex Work on the Streets of San Francisco: The Gendered  Structure and Experience of the Work"
October 14, 4:30 to 5:30 pm, Morrison 007.

Dr. Weinberg will give a public lecture in which he will discuss his experiences as a sex researcher and his extensive research on various forms of sex work. Dr. Weinberg joined the department in 1968 and for 13 years had a joint appointment as Senior Research Sociologist at the Kinsey Institute. During that time he conducted research on homosexuality and coauthored two books on the subject.

Dr. Korytova has published Global Human Trafficking Bibliography 2000-2010, available on the Global Center website and in the library of The Kinsey Institute. Her current research focuses on the intersection of sex trafficking and domestic violence. Following the presentation, visitors will have the opportunity to tour the “For Love or Money” exhibition.

All talks will be open to students, faculty, staff, and the general public.